Canada: 400 rally in support of the movement in Turkey

The movement in Turkey spread so quickly that many were left surprised. Its spectacular growth has inspired thousands around the world. It started over the government’s plan to build a shopping mall in Gezi Park, a popular public space in downtown Istanbul, but #OccupyGezi has quickly spread to a general anti-government movement. It has a clear left-wing character, hence it being named after the Occupy movement in New York. This was also reflected in many of the militant anti-capitalist slogans included as part of the official program by the Toronto organizers. Among the slogans, depicted on banners and shouted by the crowed, were: “The problem is capitalism”, “Down with capitalism”, “Fight Fascism, shoulder to shoulder” and many slogans directed at Erdogan — most recurrently “Tayyip, Istifa!” (Tayyip, Resign!). 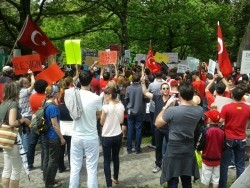 Comrades of the Marxist journal Fightback were present in the rally, despite only receiving news of the demonstration earlier that morning. We were warmly received by the organizers who thanked us for our presence. There was a wide interest in 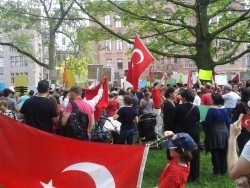 Marxism and socialist politics, reflected in the fact that we sold out our journal and also sold many leaflets. Among the many that we spoke to were many socialists and communist sympathizers. Since many of the Fightback supporters present were from Iran, Greece, and other countries in the region, the discussions had an internationalist character. Highlighted was the need to struggle for socialism in Turkey, the whole of the Middle East, the Mediterranean region — and, of course, Canada. We learnt a lot from some of these discussions. 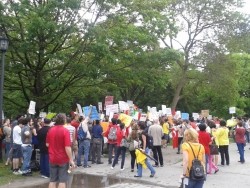 At the end of the rally, there was a brief incident. The singing of nationalist songs and the shouting of Kemalist slogans by some led to the organizers of the event to organize a socialist contingent in the crowd and to differentiate themselves from the nationalist tendency shown by some. 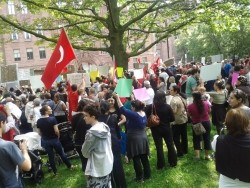 They relied instead on socialist slogans and singing of traditional leftist songs like the Turkish version of Bella Ciao, an Italian communist anthem. This also led to an opportunity for a more concerted discussion among the leftists present on the future of the movement. 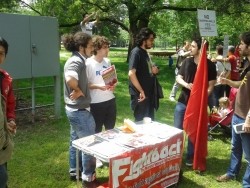 Expressing solidarity with the heroic movement in Turkey is a duty of socialists in Canada. We will eagerly participate in the coming solidarity actions and hope to organize an event with Turkish comrades in the coming days. We will let the heroic workers and youth of Turkey know that they are not alone and that they have the support of their brothers and sisters all over the world, including Canada.Follow me!